BBC weather presenter Carol Kirkwood, 58, had to get her running shoes on on Tuesday morning, after finding herself short of time to scoot back to the studio for her forecast. The TV favourite revealed she lost track of time during her break off-air and had to get back sharpish before the hosts handed over to her for the next weather report.

Eeek! Look at the time! Better get into the studio FAST!!!

Carol features throughout BBC Breakfast and had already appeared once at the beginning of the show.

But a little later on, it seems there could have been total chaos if she hadn’t made it back in time.

The meteorologist was enjoying some time away from the cameras when she suddenly noticed the time.

Taking to Twitter, she panicked: “Eeek! Look at the time!

“Better get into the studio FAST!!!” 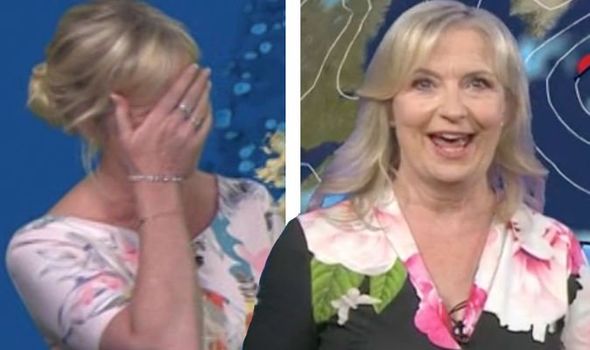 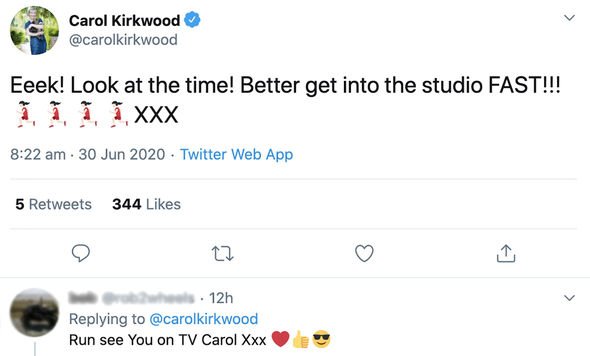 “I thought you were always on time Carol,” one joked.

Another said: “Yup, we are waiting…”

“Run, see You on TV Carol!” exclaimed a fourth. 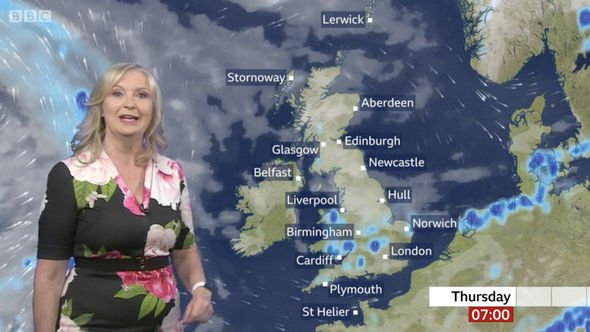 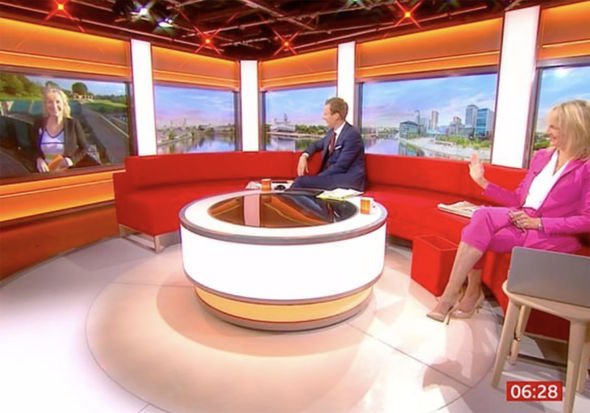 Someone else kept her updated: “It’s ok they are still interviewing.”

But not to worry, Carol made it with time to spare as she graced our screens for the second time yesterday morning.

It doesn’t seem to be her week, as on Monday she suffered a huge technical blunder while reporting outside of the studio.

While BBC hosts Dan Walker and Louise Minchin were discussion Wimbledon which was set to start this week, Carol’s weather report turned into chaos as the transmission suffered a major sound issue.

Because of the coronavirus pandemic, the oldest and most prestigious tennis tournament in the world has been cancelled for the first time ever, as the virus continues to pose a threat to public health.

This year would have marked 134 years of the famous championships, but it’s been a sad one instead for tennis players and lovers everywhere.

While many have taken to social media to share their own little Wimbledon celebrations to honour the annual event, Carol made the trip down from Manchester to take a walk around the empty grounds.

Dan said: “There’s no tennis at Wimbledon, but Carol is there. Looks pretty blustery there and that’s one of the warnings for the week isn’t it?”

As she began her report it quickly became clear that something was wrong as the meteorologist took her earpiece out.

Throughout the report she was seen playing with it and eventually had to bin it altogether.

The debacle quickly became quite distracting for viewers but forever the professional, Carol carried on as if nothing had happened.

But when the show went back to Dan and Louise in the studio, they were forced to explain what was going on.

Louise said: “Carol, I think you may be having problems hearing us.”

She didn’t respond so Louise carried on: “We will come back to you a little bit later.

“I won’t expect you to answer any questions right now, but give us a wave. Bless her, she really can’t hear us.”

Luckily, Carol was finally able to hear Louise and she gave a little wave to the hosts.

BBC Breakfast continues this morning at 6am on BBC One.