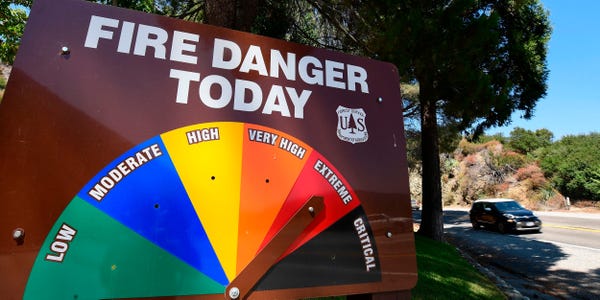 Southern California has never been this hot, according to the National Weather Service, which said the temperatures on Sunday broke all previous records in Los Angeles County.

Last week, the NWS warned that Southern California was about to be hit with a "deadly heat wave" that would bring "rare, dangerous, and very possibly fatal" temperatures.

It wasn't wrong. "The 121 degrees today in at Woodland Hills was the highest all-time temperature ever recorded at an official site in LA County," the NWS said Sunday. The previous record was 119 degrees Fahrenheit, set in July 2006.

For comparison, the hottest temperature recorded on Earth in the last three years was 128 degrees, set this past July in Death Valley, California.

The record-breaking heat is being accompanied by very low humidity and high winds. That might make it a little more bearable, but it also increases the risk of a blaze, with the NWS issuing a Fire Weather Watch from Sunday through Tuesday for Los Angeles and Ventura counties.

Have a news tip? Email this reporter: [email protected]