Shorn of a fervent home support, Newcastle struggled in the first half against their opponents who are aiming to complete a cup treble after conceding the Premier League title to Liverpool this week.

But after switching to a more positive formation in the second half, Steve Bruce’s team pressed higher up the pitch and the game opened up before a key turning point after the hour mark.

Although Andy Carroll caused problems of a physical nature on his first start since December, it was his replacement Dwight Gayle who had Newcastle’s best chance when he somehow skied over from six yards following Allan Saint-Maximin’s low cross.

Within two minutes, Raheem Sterling raced down the other end and slotted into the bottom corner with an exquisite curling finish for his 22nd goal of the season.

The errors by Schar and Gayle undid Newcastle’s hard work, but City kept their composure to extend their winning FA Cup run to 10 games.

Having already won the League Cup and with a lead over Real Madrid in the last 16 of the Champions League, it could still be a memorable season for Pep Guardiola’s side.

For Newcastle, the dream of reaching an FA Cup semi-final at Wembley for the first time since 2000 was beyond them, but they can now concentrate on trying to fulfil Bruce’s aim of breaking into the Premier League’s top 10.

City may have lost their Premier League crown this week as Liverpool ended their 30-year wait for a top-flight title, but there is still plenty for Guardiola’s team to achieve this season.

After looking tired in their 2-1 loss to Chelsea in midweek, the six-time FA Cup winners showed their appetite for the season ahead and a battle against a resolute Newcastle side, who were spearheaded by a combative Carroll.

It already felt like a training game thanks to the absence of 52,000 fans watching Newcastle’s first FA Cup quarter-final since 2006, but Newcastle’s formation reduced the first half to a game of attack versus defence where City clocked up the chances.

Before the opening goal, Riyad Mahrez skied over from 15 yards, Jesus could not direct a fizzing Kyle Walker cross towards goal and Sterling’s powerful shot was then stopped by Darlow.

But De Bruyne kept his cool from 12 yards to net his 12th goal of the season.

That gave City a deserved cushion, and they were afforded more space in the second half that allowed them to attack with their usual confidence.

Following Gayle’s crucial miss, Sterling proved clinical to make the game safe and although City could have added to more goals, they were denied by some stern Newcastle defending.

Although news of a proposed Saudi Arabian takeover has stalled during the absence of football because of the coronavirus pandemic, the team has emerged from lockdown with spring in its step.

They went into the break unbeaten in three games as they secured their place in the FA Cup’s last eight, and have since beaten Sheffield United and drawn with Aston Villa to virtually secure their Premier League survival.

It was a surprise, however, to see Bruce’s team start the game with a five-man defence, given their upsurge in form had resulted from a switch to a back four.

The logic against a team seeking a cup treble was obvious, but it also played into City’s hands as Newcastle could not get out of their own half. Carroll’s tame shot was all they had to show for a frustrating first half.

They improved after the break when they switched a 4-5-1 formation, with their midfield supporting Carroll, who was booked for a challenge on Aymeric Laporte.

The Newcastle forward was soon withdrawn after clashing with the City defender several times and it looked like the hosts’ extra mobility could take the game to extra time at least.

But Gayle, who scored his only goal of the season against Aston Villa on Wednesday, fluffed his opportunity and then watched in disbelief as Sterling showed him how it was done.

Bruce will rue the fact that two errors cost his side, but he will hope that his team’s best FA Cup run under owner Mike Ashley and a strong end to the Premier League season are evidence of his credentials for the job should a takeover finally materialise. 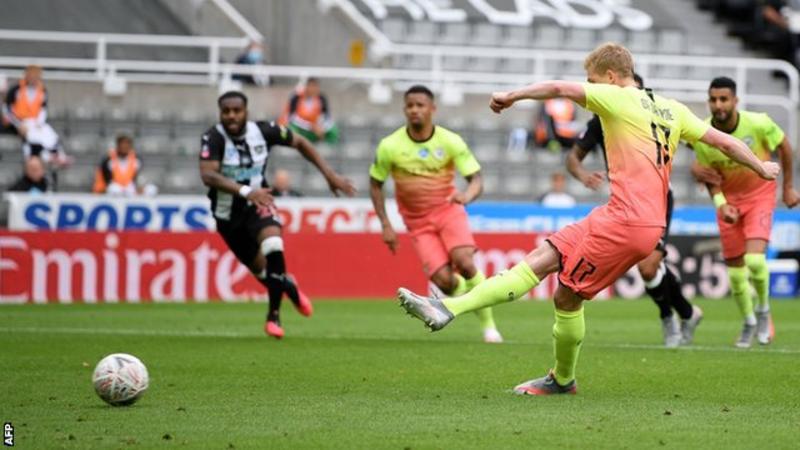 ‘We gave away a poor penalty’ – what they said

Newcastle boss Steve Bruce: “Manchester City are an outstanding team, you saw that when we tried to press them in second half. You saw that for the second goal. We made it a bit of a cup tie but for long periods it didn’t feel like that. I was a lot more pleased with us in the second half.

“You cannot make the type of mistake we did for the penalty. We have given a poor penalty away. We had to be more aggressive towards them.”

Manchester City manager Pep Guardiola: “We are in the semi-finals. It was not easy to attack against a team defending so deep but it was a good performance. I am happy to go back to London, to Wembley.

“After the defeat against Chelsea, now in the Premier League we are struggling to focus. We are close in the Champions League and there is a gap. We are at Wembley again and were winners last season so that is so good. We are of course preparing for Real Madrid now.”

While City get ready to host new Premier League champions Liverpool on Thursday (20:15 BST), Newcastle make the long journey to Bournemouth on Wednesday (18:00).

Joelinton (Newcastle United) is shown the yellow card for a bad foul.

Nicolás Otamendi (Manchester City) wins a free kick in the defensive half.

Attempt blocked. Bernardo Silva (Manchester City) left footed shot from the left side of the box is blocked. Assisted by Phil Foden.

Karl Darlow (Newcastle United) wins a free kick in the defensive half.

Joelinton (Newcastle United) wins a free kick in the defensive half.

Fabian Schär (Newcastle United) wins a free kick in the defensive half.

Rodrigo (Manchester City) wins a free kick in the defensive half.

Attempt missed. Dwight Gayle (Newcastle United) right footed shot from the right side of the six yard box is too high. Assisted by Javier Manquillo.

Danny Rose (Newcastle United) wins a free kick in the defensive half.