It's one of a batch of coins that entered into circulation back in 2005 to mark 250 years of the scholar's dictionary. 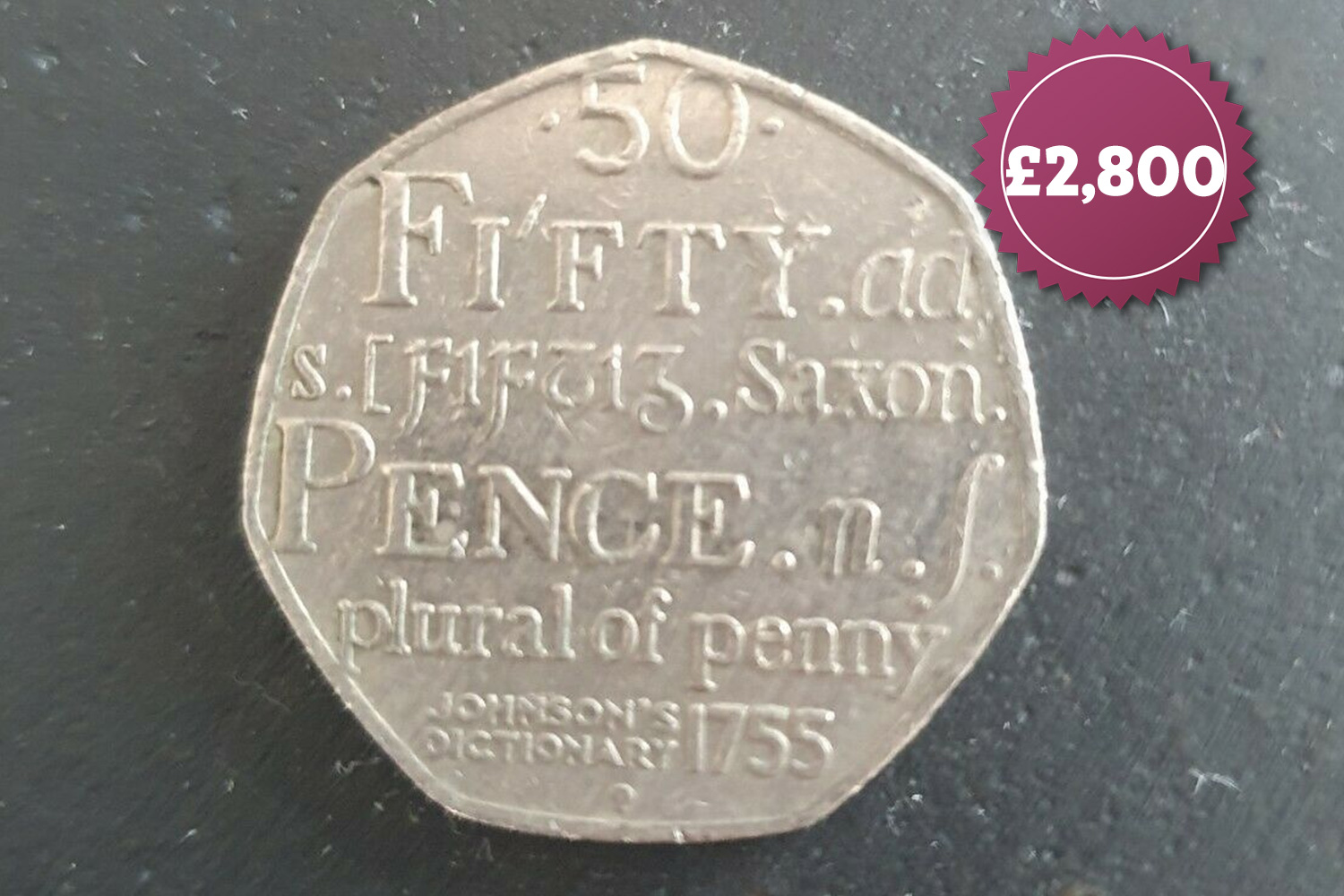 On the back of the coin are snippets from the dictionary entries for the words "fifty" and "pence".

The eBay listing received two bids before selling for thousands of pounds from a seller in Bromley.

The auction lasted seven days and sold for the winning amount back in June this year.

We don't know for sure that the buyer actually handed over the cash. 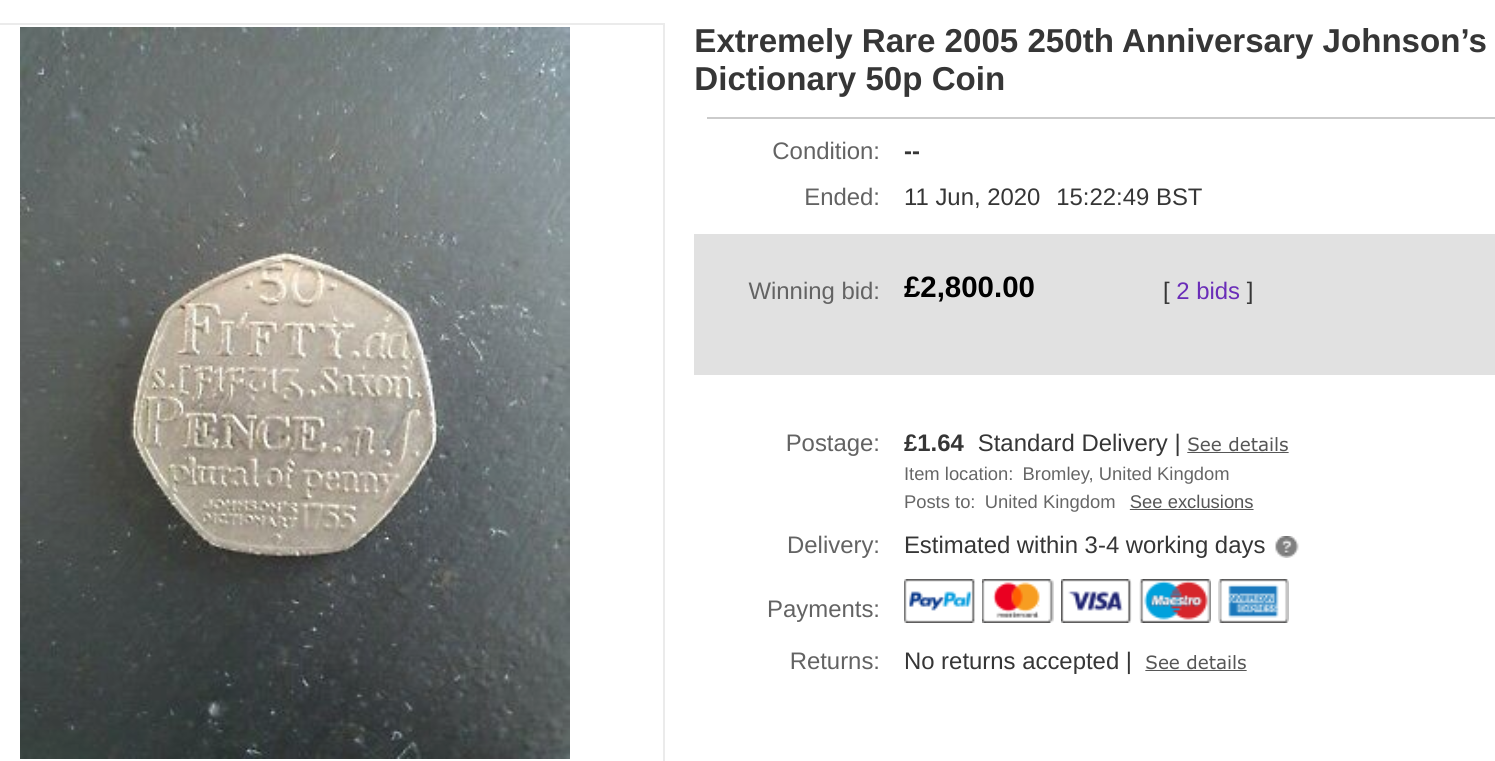 When you bid on an item on eBay, you enter into a binding contract but the auction site can't physically make you cough up if you change your mind.

But the retailer can put a black mark against your account, which can affect any future purchases and sales, and restrict your access if the seller launches an 'Unpaid Item' dispute.

The 50p coin was listed as "extremely rare" but some experts reckon it might not be as uncommon as the seller makes out.

Changechecker ranks the coin as "common" on its scarcity index, while Coin Hunter estimates that it is only normally worth around £1.

More than 17million of the Samuel Jackson dictionary 50p coins entered into circulation 15 years ago.

This figure is considered fairly high, compared to the "rarest" Kew Gardens 50p where only 210,00 entered into circulation.

But the mintage figure is no way near that of the Britannia 50p – almost 806million of these entered into circulation over a decade between 1997 and 2008.

The dangers of selling your coins on eBay

THE most valuable coins are usually those that have low mintage numbers or those with an error.

These are often deemed the most valuable by collectors.

Once you’ve found out whether the coin is real or not, you have a number of options – either selling it through a coin dealer, at auction or on eBay.

Sell it at auction

If you’ve got a coin that you would like to sell at auction then you can contact a member of the British Numismatic Trade Association.

They usually deal in very old coins but they may be able to help you assess whether it’s worth selling your coin at auction or whether it would be valuable to a collector.

Sell it on eBay

If you want to sell the coin you’ve found in your spare change on eBay then you need to know the risks.

Remember to set a minimum price that is higher or at the very least equal to the face value of the coin.

Even if your coin “sells” on eBay for a high price there’s no guarantee that the buyer will cough up.

In its terms and conditions, the auction website states that bidders enter a “legally binding contract to purchase an item”, but there’s no way to enforce this rule in reality.

The most eBay can do is add a note to the buyer's account about the unpaid item or remove their ability to bid and buy.

This is because in order to sign up to the website, users do not need to put in valid bank or PayPal details before making a bid.

If a bidder refuses to pay, then the only option for sellers is to give “second chance offers” to other bidders or relist the item.

For items of a high value, eBay recommends that sellers put a limit on their listing to approve bidders.

It means bidders must email you before placing a bid but NOT that they must pay out the cash if they win.

While rarer coins do typically sell for more than others, sometimes it's the design stands out among collectors.

For example, the Mrs Tiggy-Winkle 50p from the Beatrix Potter collection was released with a mintage of 8.8million but we're not aware of it selling for anything close to £2,800.

The seller kept the description short, which may be one of the reasons why it didn't attract many bidders.

Of course, a coin is only worth what someone will pay for it so if you have one of these at home there's no guarantee that you will be able to sell it for as much.

We've had a look and found that the next highest price that a Samuel Johnson 50p coin sold for was £40 on eBay.

Beyond that, the 50p coin tends to sell for around the £2 mark.

If you think you have a valuable coin, the best thing to do is ask the Royal Mint to check that it's real – you'd be surprised about how many ingenuous ones are out there with one in every four old £1 coins thought to be fake.

While it won't be able to tell you how valuable it is, it can provide you with a letter to confirm its authenticity.

To find out how much it's worth, you should compare it to other similar coins that have recently sold on eBay to get a rough idea.

You can do this by clicking on the "advance search" button on eBay and checking the "sold listings" box.

Sometimes, specialist auction houses, such as Spink & Son, are also happy to give a free valuation.

Remember though, if you do sell it yourself online you'll need to take into account any listing and postage charges that will eat into your profits.

But it's worth looking into it because you could actually be sitting on a small fortune.

Coin Hunter has a new tool that reveals how much your rare 50p coin is really worth on eBay.

It's not the only coin tracker available – ChangeChecker.org launched own eBay league table this time last year.

We've put together a roundup of the rarest and most valuable 50p coins so that you can check your change.