Farmers are holding out for further breakthroughs in a waterfront dispute that threatens to hold back any post-drought boom for regional economies from increased global export markets.

The National Farmers' Federation has savaged the industrial action by wharfies at Port Botany, which is holding up ships in and out of Sydney, delaying farm exports such as beef, sheepmeat, pork and grain and limiting imports such as machinery and chemicals. 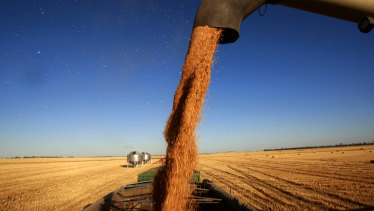 Farm exports are unusually reliant on shipping for perishable exports because air freight volumes are down 80 per cent with planes grounded.Credit:James Davies

The Maritime Union of Australia has hit the port with stoppages, go-slows and overtime and upgrade bans in a dispute that has affected stevedores Patrick, Hutchison and DP World.

A breakthrough in negotiations on Friday between the union and DP World, the nation's largest container terminal operator, has raised hopes protected industrial action still underway at the Patrick and Hutchison docks can be resolved.

Farm exports are unusually reliant on shipping for perishable exports because air freight volumes are down 80 per cent with planes grounded. Exporters are now facing vessel delays of up to 12 days, with considerable surcharges piling up as a result.

NFF chief executive Tony Mahar said he was "seriously concerned" about the impact the "reckless", prolonged industrial action would have on rural communities.

"Trying this on now puts our customer relationships at risk and it could pull the rug out from under Australia's economic recovery," Mr Mahar said. "We are urging all parties involved to resolve it immediately or pose a serious risk to the industry, regional communities and the Australian economy."

Sydney is the third-largest port for beef exports and second for pork and sheepmeat and plays a critical role in containerised grain and cotton exports.

While a bumper crop is expected after years of drought in NSW, Mr Mahar warned supply chain disruptions could take a heavy toll on the industry's recovery.

International shippers have started charging a "congestion fee" to cover costs of $25,000 a day for every day a vessel remains idle while waiting to come in to Port Botany. The Australian Peak Shippers Association said this equated to an extra $5 a bale for cotton and $17 a tonne for wheat to be exported, slashing already diminishing margins for farmers.

Roger Fletcher, Australia's biggest sheepmeat exporter to Asia, said this week the dispute had placed his contracts under threat. Delivery to one Korean market was due in 20 days but the sea delivery had been pushed back to 50 days.

"These are tough times, we are trying to hang on to customers," he said. "Everyone pulled together to help farmers through floods, fires, drought and the virus. People have donated money to help and now these bastards are just screwing the guts out of the country."

The union initially took action in response to Patrick's bid to cut some 50 pages of conditions out of its agreement with wharfies.

"Efforts over the last week have shown that when both sides sit down in a mature fashion to bargain in good faith, it delivers results," he said. "This breakthrough outlines a path for other stevedoring companies to resolve outstanding issues, rather than beat up public anxiety in an effort to drive political agendas or attempt to gain unfair and cynical leverage in negotiations."

Our weekly newsletter will deliver expert analysis of the race to the White House from our US correspondent Matthew Knott. Coming soon. Sign up now for the Herald‘s newsletter here, The Age‘s here, Brisbane Times‘ here and WAtoday‘s here.

Most Viewed in Politics