BBC Breakfast host Charlie Stayt took the Health Minister to task this morning about the latest Test and Trace app as he demanded to know how many people needed to download it for it to show results and, what the government was doing about those unable to download the app. However, Matt Hancock left viewers furious as he appeared to ignore concerns about the accessibility of the app instead declaring how “delighted” he was to hear people were trying to download it.

Stayt asked: “What percentage of the population, it’s over 16s, need to download this app for it to be genuinely useful. Do you know that?”

“Well the answer is the more the better,” Hancock replied. “As soon as.”

Stayt interrupted: “So you don’t know how many people need to download the app before it has an impact?”

“There isn’t a figure,” Hancock stumbled. “It’s not that we don’t know the figure. As soon as you have two people downloading this app it becomes useful.

“If they are in close contact and one of them tested positive then the other will know about it. That has already happened so the more people across the country, this app is for England and Wales, Scotland and Northern Ireland also have their own versions and they will talk to each other. 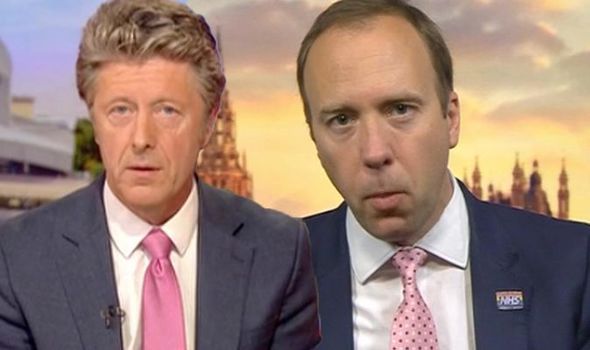 “The more people who download this app, the more effective it will be.”

Stayt interrupted once more: “On that theme, it’s an important you make, the more people who download it the better.

“But this morning, some people getting in touch with us trying to do the right thing. Paul got in touch, ‘Will you ask Matt Hancock why it won;t run on iPhone6 and older phones? There are tens of thousands in circulation.’

“‘I have an iPhone 6,’ says LF White. ‘The app doesn’t download because the phone is too old.’

“A lot of people are trying to download this and do what you’re asking them to do but it doesn’t work on older phones.” 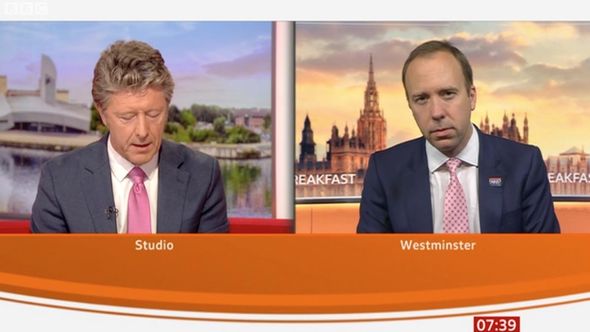 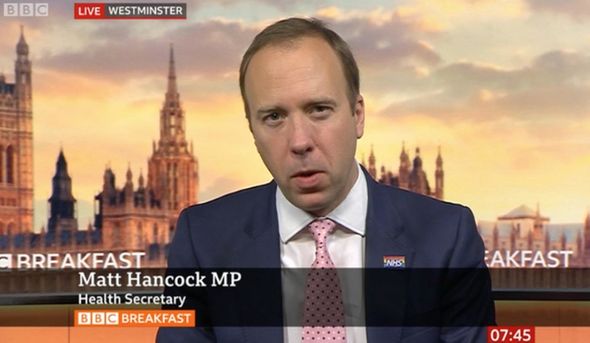 “Well, I’m delighted to hear so many people are trying to download this on their phones, it’s excellent,” Hancock grinned.

Stayt shut him down: “But it doesn’t work. There’s nothing good about that.”

“No, no I’m delighted so many people, because only a very small proportion of people don’t have phones that have the latest iOs software,” Hancock defended.

“It needs the iOs software that was released in April. The reason for that is because it needs the accurate version ofBluetooth to work as accurately as possible.”

DON’T MISS…
Coronavirus CHAOS: ‘Rule of six’ flouter calls overwhelm police lines [LATEST]
Fines for covid: What lockdown breaches can you be fined for? [INSIGHT]
Matt Hancock hits back at claims test and trace is still a farce [VIDEO]

As Stayt pressed Hancock on the latest issue with the app, the Health Secretary hit back: “Of course this is one part of a sweep of things we have done to tackle this disease.

“It’s one of a very wide range of actions we are taking. I am accused of many things as Health Secretary but to be accused of the app not being able to be downloaded for people who don’t have phones, it’s just, of course, they don’t.”

Stayt snapped: “That’s not what I said,” as Hancock grinned: “Yes you did!”

To find out details of coronavirus in your area, please fill in your postcode below.

Those watching BBC Breakfast at home were infuriated with the interview and took to Twitter to slam the Health Secretary for appearing to brush aside Stayt’s concerns.

“Matt Hancock really doesn’t give a toss about all this does he? #BBCBreakfast,” one viewer shared.

A third added: “Matt Hancock says he is “delighted so many people are trying to download the new Test & Trace app” in response to people complaining it won’t work on their old phone #bbcbreakfast.”

“#bbcbreakfast Matt Hancock confusing matters again… He shouldn’t be allowed to speak on TV. He doesn’t even know what he’s saying,” someone else wrote.

BBC Breakfast airs daily on BBC One at 6am.