Crime suspects can no longer be forced to reveal their nationality in a blow to the Government’s attempts to speed up the removal of foreign offenders.

Watered-down rules mean that anyone arrested by police or brought to court no longer has to say which country they are from.

Only criminals convicted at the end of a trial and likely to be jailed then deported will have to provide their background details.

The new regime has been forced on Ministers by top judges, prosecutors and police chiefs who decided that collecting the nationalities of every suspect breached privacy laws. 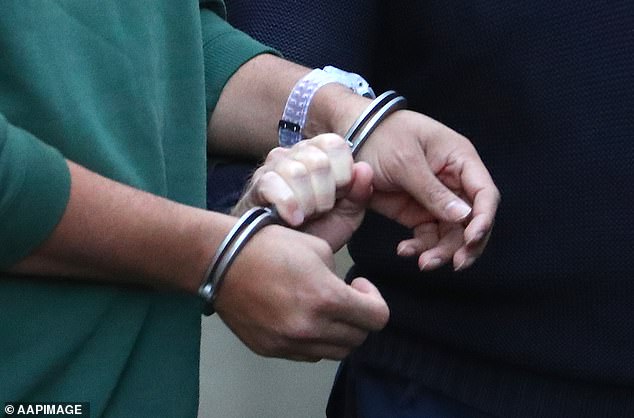 Only criminals convicted at the end of a trial and likely to be jailed then deported will have to provide their background details. Pictured: Stock photo of a prisoner in handcuffs

It comes after The Mail on Sunday revealed a string of embarrassing failures to deport serious offenders, including a Nigerian fraudster who is being flown back to the UK after his removal was ruled unlawful.

Last night, Tory backbencher Philip Davies told The Mail on Sunday: ‘As usual, it seems that the criminal justice system thinks the rights of criminals are more important than the rights of law-abiding citizens and victims of crime. That’s what the public and I find so infuriating.’ He called on Home Secretary Priti Patel to challenge the decision.

Under a 2017 criminal justice law aimed at making sure dangerous foreign criminals were caught and then removed from the UK, any suspect arrested for any offence had to state his or her nationality while defendants later charged were required to ‘give his or her name, date of birth and nationality’ when they first appeared in court.

But it is now thought these requirements breach the privacy law that came into force in the UK in 2018 – based on the EU’s General Data Protection Regulation (GDPR) – that led to an avalanche of junk email from firms asking shoppers if they wanted to remain on mailing lists.

The blanket requirement for all suspects to give their nationality is thought not to comply with the Data Protection Act requirement that personal information can only be collected if it is necessary and relevant, and cannot be held for an unnecessarily long time.

Only a tiny proportion of foreign suspects forced to give their nationality are ever charged, convicted, jailed and then deported. Latest figures show that just 4,743 foreign national offenders were returned home in the 12 months to March, down 11 per cent in a year.

A briefing note seen by this paper by a top Ministry of Justice official states that it is ‘not lawful’ under the recent legislation to collect nationality information from people who have not been convicted or sentenced and so are not about to be deported. As a result, last month members of the powerful Criminal Procedure Rule Committee agreed to amend the rules so only convicted offenders will have to reveal their nationality, and only when they are about to be taken into custody.

A Government spokesman said: ‘A defendant’s nationality will continue to be taken when a prison sentence is imposed.’