World leaders ‘mimicked each others’ lockdowns’: Study finds 80% of developed countries began restrictions in just a two-week period in March despite having outbreaks at different stages

World leaders ‘mimicked each others’ lockdowns’, scientists claim, after finding 80 per cent of developed countries began restrictions in March despite having very different epidemics.

Swedish researchers – whose country never went into lockdown at all – examined when decisions such as school closures occurred in 36 countries, including the UK, US and New Zealand.

They found most countries jumped into a lockdown within the same two-week period in March, despite having different size outbreaks.

The researchers said their findings were ‘striking’ given the differences in the scale of the pandemic in each country.

They claimed snap decisions were not made based on the true threat of the virus or to prevent devastation.

Rather, the sudden closures of work places, schools and public transport were out of ‘fear’ and ‘pressure from opponents who lambast inaction’.

The trend was most evident in countries with a strong democracy, which were also slower to react in the face of the pandemic compared with authoritarian countries.

But moving forward, any outbreaks should be tackled with a more tailored response, it was suggested. 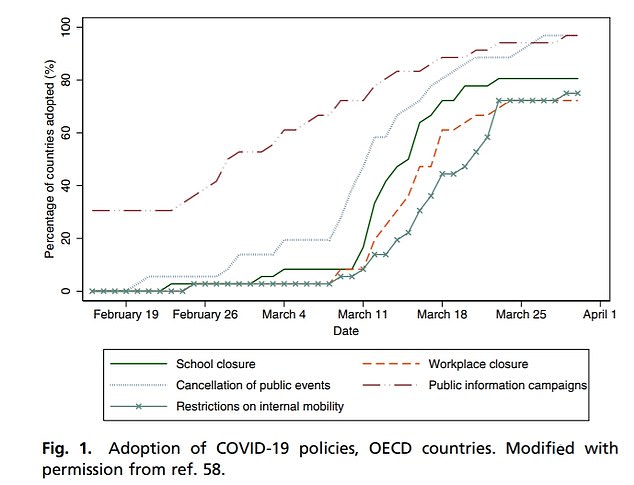 The team, led by Abiel Sebhatu, a post-doctoral student at Linköping University, analysed 36 countries in the Organisation for Economic Co-operation and Development (OECD).

WHEN DID EACH COUNTRY GO INTO LOCKDOWN?

Data for some of the OECD nations studied:

Lockdown imposed: March 17 – April 2 depending on the state. Some states have not had a lockdown.

The list spans all corners of the world, including countries Germany, Columbia, Japan, Denmark, Israel and Australia.

The team measured the timings of five measures in each country; school and workplace closures, cancellation of public events, mobility restrictions and public information campaigns.

They found that despite differences in the spread of the virus, eight in ten OECD nations implemented four of five measures all within the two weeks from March 10 to March 24. Only campaigns geared towards the public were steadily increased from February.

During this two week period, health officials in the UK went from telling the public to wash their hands more often to a full-scale lockdown.

It closely followed the actions of Spain and Italy which were in dire situations battling the worst epidemics the world had seen until that point.

Norway also jumped on the bandwagon and went into lockdown the same day as the UK, despite having 4,000 and 300 fewer cases and deaths respectively.

New Zealand also only had 102 cases and zero deaths when stay-at-home orders were given on March 23.

Author Professor Karl Wennberg said the researchers found decisions had very weak correlation the the number of cases, deaths and ICU capacity at the time they were made.

Research has shown decision makers usually benchmark with countries considered more relevant to them, such as who they share a border or main religion with.

The researchers proved their first hypotheses – that how quickly a country went into lockdown was largely dependent on what was happening in surrounding countries.

UK leaders were forced to recognise that Italy, Spain and France were dramatically shutting down around them in March. But they had made no indication they were concerned by lockdowns far away, in China and the rest of Asia.

The researchers said it was ‘at best a partial answer’ that countries copied each other because leaders felt under the same threat of coronavirus.

It usually appears when decisions are to be made in a highly uncertain environment, and the greater uncertainty, the greater the influence of earlier adoptions.

The authors wrote in their paper that ‘mimicry is a common response among decision makers when the effect of a decision is uncertain’.

Adopting the decisions of others may shield policy makers from looking ‘the laggard’—that is, a country that is slow to act.

Policymakers ‘feel pressure from opponents who lambast inaction’ and lockdowns in one country ‘creates pressure for taking similar measures elsewhere under fear of being accused of negligence’.

As a consequence, ‘priorities can become irrational’, the paper said.

Professor Wennberg told the PA news agency: ‘Politicians are very much human, they react and observe and are influenced by what their fellow leaders in neighbouring countries do.’

The researchers said following the lead of other countries may have led to countries locking down either too early or too late.

This can be problematic because restrictions have heavy social and economic costs, and ‘every “extra” day that a restriction remains in place imposes an additional burden on society’, the researchers said. 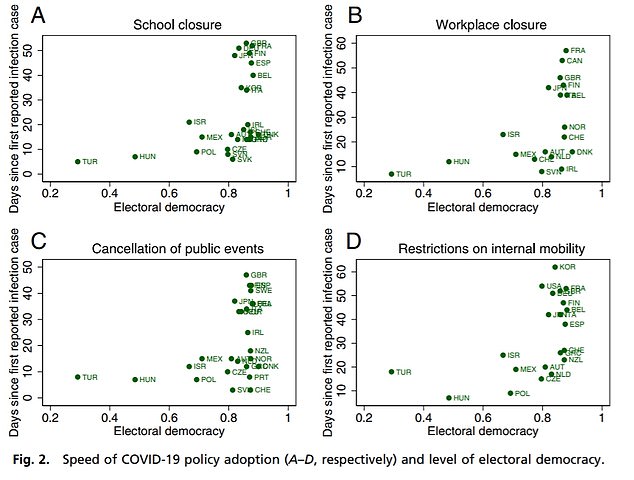 A graph included in the paper shows a trend towards late closures of schools, workplaces, public events and travel depending on how high a country scores on an electoral democracy score 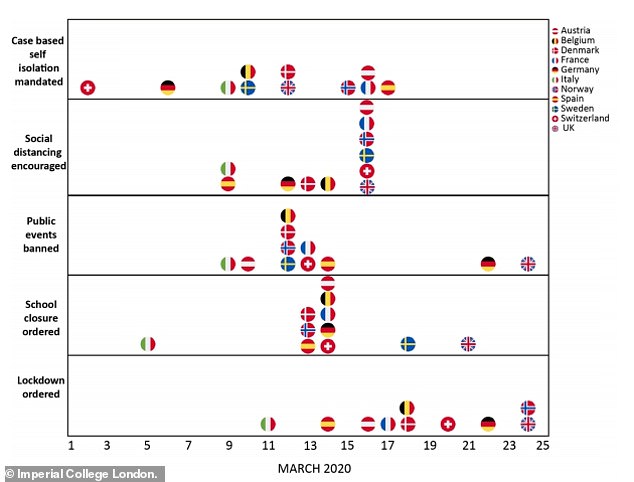 The study proved the researchers second hypothesis – that countries with strong democracies are slower to implement restrictive policies than those with weaker elected democracies, but are more likely to mimic the actions of their neighbours.

A graph included in the paper shows a trend towards late closures of schools, workplaces, public events and travel depending on how high a country scores on an electoral democracy score.

Professor Wennberg explained strong democracies may have to take into consideration a variety of voices, including unions and corporate leaders as well as the public.

He added leaders of strong democracies may be less willing to impose strict measures such as curfews when compared to more authoritarian countries.

After all, one might expect democratic leaders are dependant on public approval to stay in power and will have concerns about how the public will react to restrictions on their personal freedom.

‘Negative public perceptions jeopardize politicians’ hold on power in democracies, but far less so in autocracies,’ the paper said.

Professor Wennberg said he hoped copy-cat behaviour would not be repeated with local peaks of the virus or a second wave to show leaders have learned.

He said: ‘It’s very natural for human beings to mimic each other in times of great uncertainty but now we know much more about the virus and how it spreads and how it’s treated, my hope would be countries adopt much more precise and tailored measures for specific regions and cities.’

The research is published in the journal Proceedings of the National Academy of Sciences (Pnas).